The Netherlands Radio Philharmonic Orchestra is delighted to announce the appointment of Stéphane Denève as its Principal Guest Conductor as of September 2023.

Stéphane Denève is known for his immense love of French music and as a passionate advocate of 21st century music, making him and the NRPhO a perfect match. In collaboration with Dutch public broadcasting and broadcasting companies NTR and AVROTROS, the orchestra is one of the most important advocates of contemporary music and young composers in the Netherlands, a duty they have fiercely carried out since 1945. This mutual passion manifested itself many times in earlier concert seasons: in 2017 Denève led the NRPhO in a world premiere by Escaich at the NTR Saturday Matinee series, and in March of last year he conducted the Dutch premiere of Connesson’s Maslenitsa at the AVROTROS Vrijdagconcert series. Denève will combine his new appointment with his role as Music Director of the St. Louis Symphony Orchestra.

Roland Kieft, managing director of the Netherlands Radio Philharmonic Orchestra: “We are very pleased with the appointment of Stéphane Denève as the new Principal Guest Conductor of the Netherlands Radio Philharmonic Orchestra. For several years now, his concerts have been among the highlights of our season. His great sense of sound, his authority in French music and his passion for music of our time are exceptional. With Chief Conductor Karina Canellakis and Stéphane Denève as Principal Guest Conductor, the NRPhO has optimally safeguarded the artistic development for the coming years.” 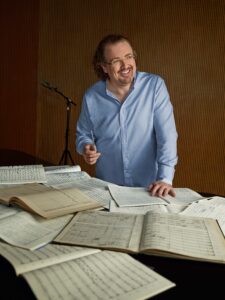 Stéphane Denève about his appointment: “It is with an (unmasked!) great smile on my face that I welcome the invitation to become the Principal Guest Conductor of the Netherlands Radio Philharmonic Orchestra. The rich DNA of this wonderful orchestra ideally fits my passion for colorful, modern and generous-hearted music making. I would like to thank all the musicians for their enthusiasm and for the inspiring concerts we have shared since the first time we met each other in 2014. I am looking forward immensely to deepening our musical relationship in the years to come!”