Bruckner's 'Romantic' and a tribute to Xenakis

Karina Canellakis conducts a new work by Janco Verduin, conceived as a tribute to Bruckner and Xenakis. Bruckner's Fourth Symphony.

Premiere work for orchestra and Ralph van Raat
Boltzman's constant (K) for Kyrie. The speed of light (c) for Credo. Entropy (S) for Sanctus. In his premiere work MASS, for orchestra and pianist Ralph van Raat, the Dutch composer Janco Verduin links the fixed mass chants to mathematical units of physics. The physics references are a nod to the Greek composer and mathematician Iannis Xenakis (see Hedendaags 3, on 2 April), who would have turned 100 in 2022. The Mass References pay homage to the sound cathedrals of Anton Bruckner, whose Fourth Symphony will be heard after the interval.

Bruckner's almost pictorial Fourth Symphony
Bruckner himself called his Fourth Symphony his 'Romantic' symphony. You could also say that the work has potential as the soundtrack to an epic fantasy film. The Scherzo features a hunting scene in brass, with the trombones growling like a pack of foaming hounds. But Bruckner ultimately concealed his programmatic intent. 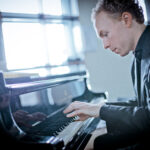